The fishing industry is the main supplier for seashells for the shell and shell craft export business, which are 99 % either a waste product of the food chain or dead collected on beaches.

A ban on marine export products will have a direct impact on 4.2% to 5% of the workforce of the Philippines.  Millions of individuals who supply to the shell and shell craft export business will loose additional income due to the proposed ban.

BFAR estimated in a 2009 report that the fisheries industry is good for 2.3% of the Philippine GDP (gross domestic product).   A total ban on marine export products will show a significant dip in the GDP.

BFAR published in a 2009, Philippine Fisheries profile, that per capita, the crustaceans and molluscs food consumption is 4kg per year.

NSO estimates that the population of the Philippines in 2010 is 94 million individuals.

A simple calculation makes that the Philippine population consumes about 376,000 metric ton of crustaceans and molluscs food.  We can consider that 30% of this are molluscs food resulting in 112,800 metric ton.

1,552 metric ton of shells are exported by the shell and shell craft industry. (BFAR 2009, profile report) 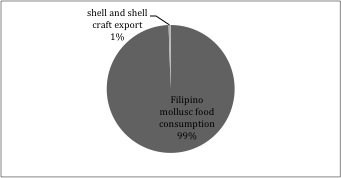 Shells eaten in the Philippines

Of the estimated 12,000 species of seashells found in the Philippines, 350 shells are only regularly used in the food industry. (Dr. L.V. Loureta, 2008)

Shells exported in the Philippines

A total ban on shell and shell craft products puts the Philippines in an economical disadvantage: for itself and compared to the other Southeast Asian countries.

700 million dollars of exports are affected.

As well as the sustainability of the income of 1.6 million Filipinos is in jeopardy.

Finally the Philippines are at risks of loosing 2.3% of its GDP.

We see a huge potential for the shell and shell craft export business to tap more in to the resources of the food industry to source raw shells for processing and export.  Instead of banned, the industry should be promoted: only 1 % of the waste products of shells are used today.

Entire sectors which Europe and America exploit for decades, such as the industrial harvest of shells for better egg production, development of extensive oyster breeding, etc. are further possibilities yet untapped for the country.

NUMBERS IN A SHORTCUT

The Cebu Green Trade Organization (GTO) is established in 2011 as a non-profit organization that groups all shell and shell craft exporters in Cebu. GTO is a sector member of PhilExport.